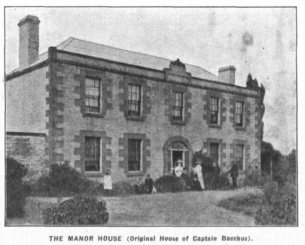 Captain Bacchus was the second European settler in the township which has been named after him.

Captain William Bacchus arrived in 1838 with his son Henry.  They commenced farming in the district. They were successful farmers and built a substantial residence known as the Manor House in the 1840s which still stands today, located in Manor Street.