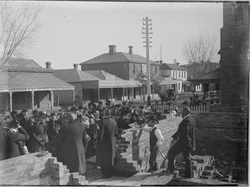 Pictures Collection, State Library of Victoria
View of Main Street looking towards Graham Street and the Border Inn, circa 1898. The long established Anderson's store, first building on the left, can been seen. 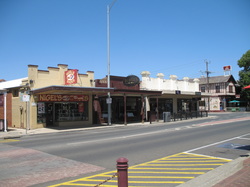 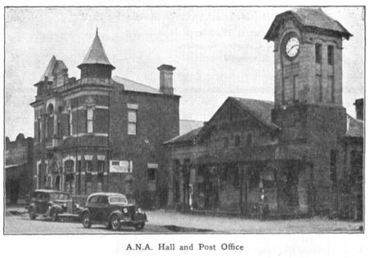 Image: Latrobe Collection, State Library of Victoria.
The ANA Hall
Constructed in 1904-1905 for the Australian Natives Association (ANA). A foundation stone was laid in December 1904 by James Purves, one of the founders of the ANA in Australia.

As reported in the Bacchus Marsh Express in 1904.

It was demolished in the mid 20th century and a new building erected on the same spot.  That building was closed as a post office in the early 21st century and the post office was moved into the Bacchus Marsh Village Shopping Centre, further down Main Street, (at the site of the old Butter Factory).

This photo shows the ANA building on the left and the Post Office on the right. 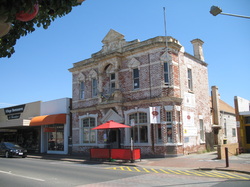 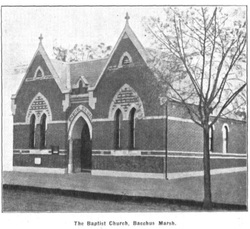 The Baptist Church was first located in Lerderderg Street, next to the Primary School.  In 1898 it was relocated to Main Street next to the Post Office. It was demolished 1985.  (Moore & Oomes, pp.43,92,).

A new Baptist Church stands today in Holts Lane, Darley.  To this day nothing stands in its old location in Main Street, only a carpark. 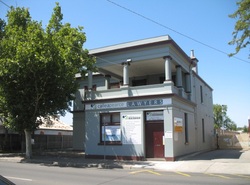 The building ceased operating as a bank in 1987.

See an image of the Bank from about the 1960s from the National Trust of Victoria website. 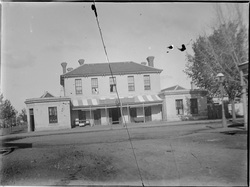 Pictures Collection, State Library of Victoria
The Border Inn, currently known as Flannagan's Hotel was established in 1850 on the corner of Graham Street and Main Street. 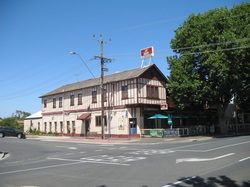